During the summer of 2001 I came across a movie that really spoke to me at the time.  The movie is none other than Martin Scorsese’s Taxi Driver.  For those who don’t know it had a cast full of young and upcoming stars such as Robert DiNero, Jodie Foster, Harvey Keitel and Cybill Shepherd.  Many consider Taxi Driver to be one of greatest films of all-time and it is usually ranked in any given 100 best films list.  In fact the film was considered to be culturally significant by the US Library of Congress in 1994. 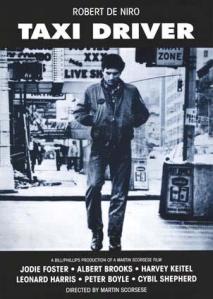 The movie takes place in NYC, more specifically midtown Manhattan, and the main character, Travis Bickle (Robert Dinero), is a Taxi-Driver who works the night shift because he can’t sleep.  Travis is a Vietnam Vet who is depressed and lonely.  Driving a taxi in early 1970s New York doesn’t help this either.  More specifically, he was doing this at night so he got see and witness the grittier side of the city.  Hence his line, “Someday a real rain is gonna come and wash all the scum off the streets.”  To make a long story short, he eventually loses it after striking out with a lady (Cybill Shepherd) and being played by a politician.  As a result he plans and trains to eventually kill the pimp (Harvey Keitel) of Jodie Foster’s character so that he might liberate her and set here free from the means streets of NYC.  He does so and Foster’s character is reunited with her family and he is praised as being her savior.

This movie is a great snapshot of not only 1970s NYC but also of the general pervading spirit of the city to this day.  The nastiness, the meanness, the disregard for one another – it’s just so New York.  And this movie resonated with me at the time because I was a doorman on the Manhattan’s Upper West Side.  Now mind you, the New York of the 1970s was a lot worse than the New York of the early 2000s but still the general feel is the same.   Everyday I hopped on the 4 train and went to work.  Sometimes in the midst of the crowds of rush hour or in midst of the crowds of the night, it all just depended on the shift that I was working.  Now keep in mind that I was a scrawny whiteboy who weighed no more than 130lbs on a the subway traveling through neighborhoods that weren’t too keen on white boys like me.   I got plenty of stares and just kept my head down.  There were plenty of characters and incidents that I encountered and witnessed, from teenage boys fighting with an old homeless woman to one guy telling another guy that if he didn’t stop staring at him he would take care of him at Fordham Rd.  Then there were the guys that I worked with, one was an ex-con who bragged about his obsession with transvestite prostitutes, another was an Albanian who was a self-made immigrant who spoke with a thick accent and always looked like he was up to no good.  Then there were the tenants of the building of which there was no shortage of characters and personalities.  There were students from Columbia and Juliard who were incredibly rich and in some casess rather entitled, there was the man dying of AIDS who smelled like feces all the time because he was dying and couldn’t control his bodily functions, there was the young vixen who worked for the Rockettes hoping to strike it big in show biz, there was the guy who was born and raised in the apartment that he was currently living in (when his mother died he bought the bed that his mother died in at the hospital and put it in his living room placing some of her belongings very neatly on top of the bed), there was the couple who were physically abusive to one another when they drank, there was the guy who was visited once a month by a jamaican prostitute and the list goes on.

I was an angry teenager before my days as a doorman but living and working in such an environment only served to make me more angry and cynical.  So when I saw Taxi-Driver I resonated with the character Travis Bickle, I felt vindicated by the things he said and the emotions he expressed.  I felt like he was representing me and had given a voice to someone like me.  Going further, the sense of justice that I felt in his vigilante actions gave me a sense of control in a world that seemed so daunting.   I felt validated in regards to my experiences and feelings that summer.  Fortunately and thankfully that was as angry and cynical as I’d get.

Fast forwarding to this past fall, my wife and I sat down and watched Taxi Driver.  My wife had never seen it or heard of it for that matter and I hadn’t watched it in years.  And I must confess I didn’t really enjoy it, in fact I didn’t resonate with it like I had in the past.  I love the environment in which it was filmed and the actors like Robert DiNiro but it no longer spoke to me in the same ways as previously indicated.  I wasn’t excited by the street justice of Travis Bickle killing the pimp at the end nor did I see it as being okay or even necessary.  The reality is that the human sense of justice often times ends up being no justice at all.  We think we know what justice is but how can we know justice apart from Christ Jesus?  In fact, I am finding that I am turned off by violence more and more.  It doesn’t jive in my mind the way that it used to.  I always saw some merit in violent action such as it being used to teach bullies a lesson or to minimize or get rid of a threat like Hitler or Al Qaeda.   Jesus’ call to love our enemies is no longer an abstract concept to me rather it has become a reality that I believe should encompass all of our very being.  Jesus loved to the point of death and in turn look at what happened – He triumphed over the powers and the principalities.  They used very logical ways and means, the ways and means of governments, mafias and mobs and yet they couldn’t and didn’t get rid of Him.   Instead their ways and means were powerless to the power of God, to the love of God in Christ Jesus.   The Roman Empire was triumphed by a peasant from the small town of Nazareth who willingly died rather than “fight for his rights.”

When I really take in where I’ve been and where I’ve come from I am blown away by the transformative effect of the Gospel of Jesus Christ on myself and so many others.   You see I wanted rain to come down on all of these people that I encountered and wash them away.  I saw them as scum and refuse and in turn treated them rudely.  In fact, it was so bad that I was eventually fired from my doorman job.  Never did I seek to love them because I felt they had no worth due to their actions and their lifestyle.  I was a Pharisee without even realizing it.  And don’t get me wrong I still struggle to love others and I have a hard time forgiving but it also amazes me how far the Gospel has taken me and can take all of us.

In a sense it could be said that a “real rain is gonna come”.  But this time around instead of waiting and hoping for it to come raining down on others I hope I’ll be one of the ones who seeks to cover others with the robe of Jesus Christ.  I hope to do so so that they need not worry about such things when they do happen.  After all, I’m already covered and well protected and undeservedly so.