I am a grandchild of the Greatest Generation.  The strain of the Great Depression, the importance of World War 2 and the storied growth of post war America in the late 1940s and 1950s are things that I’ve heard much about growing up.  Dates like December 7th, 1941 and June 6th, 1944 will be embedded in my mind forever because I am the inheritor of the great sacrifices, prudence and resourcefulness of a people who did not have much and came together when it mattered greatly.

These things make national holidays a rather awkward and uncomfortable affair for me.    I’m not patriotic nor am I all that nationalistic. In large part, it’s not because I don’t care, it’s because of my faith in Jesus Christ.  Mind you, I fully understand Luther’s doctrine of the Two Kingdoms, but that still doesn’t take away my uneasiness about pledging allegiance to a flag whether American or Christian or joining in liturgies that presuppose that we somehow have God’s favor as a nation.  Nonetheless, if I am being honest, this brings about a certain level of guilt and shame on my part.   I think some might call it cognitive dissonance.  I hear my superego voice saying, “You’re so ungrateful, what would your grandfather think of you along with any of those of his generation who sacrificed so much so that you could have what you have right now?” or “you wouldn’t be so flippant if you were in their situation” or “how dare you, you wouldn’t have the privilege of disagreeing if not for such sacrifices” or “Freedom isn’t free”.  And to be fair, if I had to choose between Soviet Era Russia and post-World War 2 America I’d go with the latter in a heartbeat.

We’re now almost 75 years removed from the day in which the Japanese attacked the United States at Pearl Harbor.  Much has changed since then.  For example, before 1941 we were not a superpower, but after 1945 we moved into the role of superpower.  One scholar claimed that just like Rome we went from being a republic to being an empire in the years following World War 2.  Whereas previously we could be considered a sort of underdog or, at the least, one of the smaller children on the playground, now we were the biggest and the strongest.  As a result, we found ourselves meddling in the affairs of various countries from Iran to Vietnam to Cambodia to Chile to El Salvador and the list goes on.  At this point, it could be argued that we’d betrayed the very spirit of our founding fathers and allied with the spirit of King George III.  Interesting how we often become what we hate, isn’t it?

A few weeks ago we had as our gospel reading the healing of the demoniac in the gospel of Luke.  Many tend to see this as a simple exorcism by Jesus, but there’s much more going on in the text.  The man was possessed by demons named Legion.  Anyone familiar with the Roman army would recognize this as the title or name for Roman military units that consisted of about 10,000 Roman soldiers.  Rome had about 30 such units spread out across its empire.  One of these units occupied the land of Palestine.  Legions were not known for being friendly towards those native to the regions they occupied and controlled.  In fact, the Legions survived by taking resources and taxes from the said regions.  Their presence caused much fear and anxiety amongst the people.  The Legions could drive the people mad with such things. When Jesus exorcised the man of Legion and the people of the town found him in his right mind they were filled with fear and asked Jesus to leave.  They did so because they were afraid of retaliation from Legion.  After all, Legion had just drowned a bunch of pigs.  Thus, Jesus went on his way. 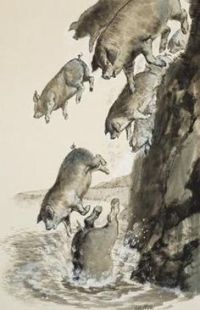 We Americans often see ourselves as the good guys, as benevolent and good, in any given military conflict.   The parallels between Legion and our American forces are quite disconcerting.  Our military presence throughout the world is not always perceived to be a good thing and has often brought about much anxiety and fear on local populations. For example, our influence and presence in the Middle East has caused much fear, death and destruction going all the way back to Iran in 1953 and the CIA led coup of Prime Minister Mossadegh.  Many of the issues we are dealing with now in regards to terrorism and radical Islam all lead back to us and our policies and actions.

It seems to me that what find ourselves in conflict over today is far different than what the Greatest Generation found itself fighting for.  Understandably, it was a different time and a different place.  As a follower of the Way in 2016, my faith compels me to be very uncomfortable with how much we spend on national defense and the false narratives that we tell ourselves so that we don’t have to actually examine our own culture and way of life.  We often note the sacrifices of those on our side while failing to note those people and cultures we’ve sacrificed to keep our way of life going throughout our history.

I am the grandson of the Greatest Generation and I was born in the American Empire, I was born on the 5th of July.