When I was 15 years old I started going to hardcore punk shows.  In fact, I can pretty much remember every show I’ve ever been to.  I’ve been to over 100 shows and my wife can tell you it shows in relation to my hearing.  I usually watch TV with the volume pretty high. What’s funny is that I didn’t realize this until I got married. 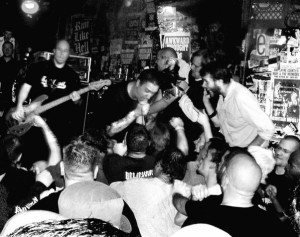 The first hardcore show I went to was Murphy’s Law and SubZero at 7 Willow St in Portchester, NY during November of 1997.  The vibe, the intensity, the sense of fear, the intimacy with the bands and there being no barricade.  The mosh pit, the pile-ons, grabbing the singers mic.  It was new and so cool.  From that moment on I was hooked.  More specifically I was hooked on a thing called New York Hard Core also known as NYHC.  I can remember going out and buying my first hardcore album which was Sick of It All’s Blood, Sweat and No Tears.  And then the next one which was Madball’s Set it Off.  The message and the aggression of these bands resonated with me so much, I had finally found my tribe!  From that moment on I was fixed and couldn’t wait for the next show.  On Wednesdays I’d run down to the local stationary store to see the show listings in the latest Village Voice.  I’d look over Coney Island High’s listings, CBGB’s listings, the Wetlands’ listings and then make sure to see if there were shows in places that didn’t normally have shows.  The names that I looked for were embedded in my mind: Madball, Sick of It All, Agnostic Front, Breakdown, Downlow, NRSV, Murphy’s Law, SubZero, Kill Your Idols, Awkward Thought and the list went on.  When I found out the date of next show I counted down the days, it was what I lived for.  Especially if it was the first time I was seeing the band.  And the routine of going to a show was always the same, hop on the 4 train at Woodlawn and head down to the city on a Sunday afternoon.  Rain or shine, it didn’t matter, we were there and ready to let it all out.

Being a New York City hardcore kid has been a huge part of my life.  I listen to all kinds of music nowadays but I always come back to hardcore.  It’s like a drug fix that I need to have on a daily basis.  It’s always resonated with me and it’s hard to explain to those who don’t “get” it.  Often people think it’s bad because it’s aggressive and abrasive but in most regards it’s rather positive.  From the straight edge bands like Minor Threat and Youth of Today to the spiritual bands like the Cro-Mags and the Bad Brains to the socially conscious bands like Sick of It All, Ignite and Agnostic Front. 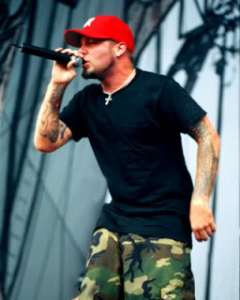 But when it comes to NYHC there’s been one thing that has always bothered me, it doesn’t get much recognition despite the fact that it has been incredibly influential in ways that most people don’t even realize.  So much of what we see today in style, clothes and even music is the direct result of the New York Hardcore scene.   Tattoos and piercings, baggie pants, camo cargo shorts that are sold in Kohl’s, vintage clothing, the NY Yankees hat craze in the 90s led by Fred Durst of Limp Biscuit, the gentrification of the Lower East Side, CBGB t-shirts, the Emo and pop punk bands that cite NYHC bands as influences such as Fall Out Boy and New Found Glory.  The influences are greater than many realize.  And yet there’s barely any mention of NYHC.  It’s always funny when I see a teenager wearing a CBGB t-shirt or some young girl talk about getting a tattoo or better yet how cool it would be to live in the East Village of NYC.  It’s funny because what was once looked down upon or not even thought of as being cool is now cool.  Isn’t it interesting how that works?  Pop culture has a way of doing that.  I guess the far reaching aspect of NYHC really hit me when I was at Seminary and the guys there talked about getting tattoos.  It hit me then that tattoos were truly no longer cool.  But I still do think NYHC is cool.