Last year I got to see an incarnation of the legendary band the Bad Brains known as the Regulators.  It wasn’t the original lineup, instead it was half of the original line-up with Dr. Know on guitar and Daryl Jennifer on the bass.  John Joseph of Cro-Mags fame filled in on vocals singing the songs that the legendary H.R. used to sing and do back flips to.  Despite it only being half of the original line-up many, including myself, ventured to Webster Hall to see the Regulators.  I think most of us were happy with what we saw and got to sing along to. John Joseph is no H.R. but he’s the best one around to make the attempt and he did a good job.  It was a cool sight and a goose bump eliciting experience to hear an entire room sing along to their classics such as “Banned in DC” “Regulator” “Right Brigade” “Attitude” along with many more.

Now before you decide to close this page bear with me. This is not simply a blog about a band I like playing live, rather it’s a window into something much deeper that relates to how we order our lives in this so-called post-modern era.

Here was an entire room of people singing lyrics to songs that invoke biblical stories, Rastafarian spiritualism, the positive thinking of Napoleon Hill and Marxist politics (I’m sure I’m leaving some other characteristics out).  I think it’s fair to say that many not familiar with hardcore punk would be surprised to learn of such lyrics coming from a so-called punk band.  What I think may be even more startling is that such a band has had a lasting affect on not only hardcore punk but also scores of musicians and bands across the musical aisle.  The Foo Fighters, the Red Hot Chili Peppers, rapper Lil Jon and the Beastie Boys all claim the Bad Brains as hugely inspirational and influential.  Often, when I wear my Bad Brains t-shirt I have people on the street start conversations with me about the band.  This past summer as my family and I walked the streets of NOLA we had a homeless man start talking with me about the Bad Brains.  The conversations, however brief, are always positive, friendly, and cordial.  The legend and the influence of the Bad Brains doesn’t seem to be waning either.  And that’s what I find thought-provoking.

Many on the church side of the aisle are convinced that the church’s biggest enemy is radical secularism.  I suppose this is compounded by the likes of pop culture atheists like Richard Dawkins and the late Christopher Hitchens.  Yet according to Charles Taylor, the author of A Secular Age this is simply not the case, or at the least, it’s only a small piece of a larger puzzle.  Taylor argues that because modernity has “disenchanted” the world in which we live many are now yearning for enchantment or enchantedness. So, for example, in the West a Christian worldview was the predominant one but the Enlightenment and modernity brought that into question and disproved certain pieces of that view (think the earth being the center of universe). 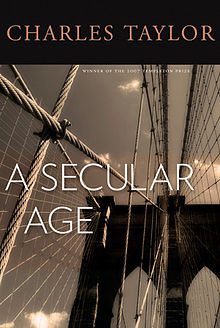 Modernity brought with it technological advances that vastly improved the lives of many Americans.  It also made the world a seemingly smaller place which has only gotten smaller through the process of globalization.  Of course, within such a milieu, a culture of consumerism has developed that has made the individual supreme.  Because of these various factors Christianity is no longer the given religion. Rather there is a plurality of options from which we can pick and choose correlating with our consumerist tendencies.  It’s not that people are less religious it’s that they are now able to choose what they like and don’t like in their spiritual quest.  Because modernity has disenchanted and delegitimated the very structures and givens of something like the institutional Church people feel free to pick and choose as they please.  In a globalized time as this it’s a lot harder to claim that we as Christians have a market on the truth when ancient religions such as Buddhism, Taoism, Judaism have some very brilliant insights.  Thus, it’s not that people are rejecting religion per se, it’s that they can make it up as they go along.  And since the world has been disenchanted this makes spiritualism or spirituality very attractive, people yearn for imagination and mystery.  Hence, the “I’m spiritual, not religious” line.

In light of this, it’s really no wonder that a band such as the Bad Brians would have such a lasting appeal given their message and amazing musicality.  They are speaking to the need of us moderns for enchantment, for something deeper in a world of boring humanism. Who would think that a room full of tough, disenfranchised, outcasted, tattooed knuckleheads would be yelling out lyrics such as these:

“We can’t lose with Jah on our side. Oh bring down the walls, Bring the Walls down.”

“Organize, centralize. It’s time for us to fight for our lives. Destroy Babylon. Oh there is a way.”

“I’ve got that supertouch, Chances are I’ve got too much, I’ve come to let you see, That you also can be free.”

But they are.  The desire for enchantment that Taylor speaks of is strong.  What’s interesting is that this desire has been fed time and time again in the hardcore scene that the Bad Brains helped create.  In a fascinating way, the Bad Brains began and inspired a movement towards enchantment.  It’s no coincidence that the first line of the first song off of the Cro-Mags seminal album Age of Quarrel is:

“Struggling in the streets just trying to survive, Searching for the truth is just keeping us alive”

And then from another song:

“Searching and searching for something real, You gotta know how I feel, ‘Cause we been looking after the truth, Rejected those lies of our youth”

What’s more, the very title the Age of Quarrel or Kali Yuga comes from the Hindu Scriptures and refers to the last of four stages that is characterized by great strife and contention.  A simple knowledge of the Cro-Mags reveals that in many ways they were the representation of what went wrong with modernity, revealing that such an adventure could not solve the world’s problems and lead to a utopia.  John Joseph was an orphan and runaway who lived on the streets in order to survive.  Bassist and songwriter Harley Flanagan fought his way through school and on the streets whilst crafting what would become one of the greatest albums of all time. 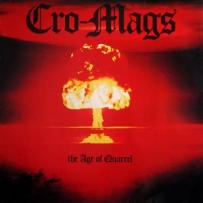 Their formative years were spent living in the most crime and drug-ridden neighborhood New York City has ever witnessed: the Lower East Side of the 1970s and 1980s.  Oddly though, these young men were drawn to spirituality in order to make sense of the world around them. As one of the lines from their song Survival of Streets states, “Wake up with gun on my head, but that’s life, the life I’ve led…life’s hard so I gotta be hard too.”  It was a rough world they came up in and lived in and yet they were attracted to spiritualism and later Hare Krishna.  Joseph went so far as to become a devotee. Though, today, he is quick to state that we should all find our own spiritual path.  Thus, spirituality reigns supreme not religion or dogma as its characteristically understood in this age.  In his books and performances Joseph continually encourages the spiritualism that Taylor speaks of, the spiritualism of this “Secular Age”.

Such a spiritualism continues on in the lyrics of bands who come from various socioeconomic backgrounds throughout the New York City area such as Youth of Today, Sick of It All, Shelter, 108, Burn and so many others.  These are a wonderful blueprint of Taylor’s point that we are not less religious per se.  Rather, the religious uncertainty of this modern age has prompted us to seek out some sense of the other worldly.  Thus, the desire for enchantedness, for mystery, for something more.

As a pastor I’ve heard the line “I’m spiritual, but not religious” numerous times throughout the years.  This may simply reveal a deep desire on the part of many for God, for transcendence, for something more than what modern life has to offer.  There are plenty of shallow searchers out there and I often cringe inwardly when I hear that line, but I’ve also been taken in by the spirituality of the Bad Brains, the Cro-Mags and others.  I’ve been one of those people and in large part still am.  I am no more a product of this age than the guy or girl sitting next to me on the subway is.  Through this I’ve come to learn that there are also some very conscientious people seriously searching and digging.  This requires us to be ready to give a reason for the hope that is in us but in such a way that seeks not to control in ways that might benefit our own ministries or egos.  In a number’s obsessed culture and church this may actually require that we rely on the Spirit to do its work and let the cards fall where they may.  Looking out on a pluralistic culture the task of convincing people that Jesus is Lord seems arduous, if not impossible.  But maybe that’s the point, how modernistic and Western to think that we can find a system of ideas to convince people that Jesus is the Way, the Truth and the Life.  How modernistic and consumeristic to think that if we have the right image, the right music, the right lighting it will work.  Is that not but the result of our hyper-individualism and consumerism and why there are so many “nones”?  Instead, it involves more than the head but our whole being, instead it requires discipleship which bespeaks enchantment and mystery.  Hence, “See how they love one another.”